Following our AGM in September, John Armarego will provide a presentation on after market fuel injection and computers as fitted to his highly modified TR8 and to other Triumphs.  John is a long time member of the Club and has a wealth of experience in Triumph modifications, particularly the Rover/Leyland V8's.  John's current TR8 is capable of in excess of 500 bhp which John admits is a little too much!

This promises to be an entertaining and educational presentation that you shouldn't miss.

AGM will be at 7.30 followed by John's presentation and the September general meeting, at the Deakin Sports Club, Grose Street, Deakin.  All welcome.
Posted by Web Master at 23:00 No comments:

Come to our August general meeting for a presentation from David Snape, representing IAG Insurance and find out all those interesting things that make up our premiums, who IAG represent and their future growth areas.  Meet at the Deakin Sports Club, Grose Street Deakin at 7.30pm where David will give his presentation prior to our general meeting.  All welcome
Posted by Web Master at 22:53 No comments:


by Chris Doble
Dianne and I have just returned from a driving trip to where we spent a lovely three weeks with our daughter Rachel.  Our sight-seeing included, The Mummy Exhibition, the South Bank, , the Gold Coast and the .
I was sitting in my shorts and T shirt watching the Block on TV.  The temperature was 10 degrees and I noted the temp back in was minus six with I suspect an even greater chill factor that was not mentioned.  Somewhat bored with the TV I was pondering what to do with tomorrows “freedom day” because Rachel was going to work and Dianne needed a rest from the travel.  An idea popped into my head. 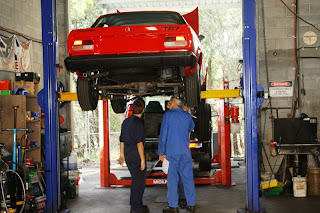 Greg Tunstall Mechanical has advertised quite a lot in our magazine and has done quite a number of jobs for our club members.  On the Thursday, I gate-crashed the Greg Tunstall Mechanical Workshop in which is about 30 K south of Brisy CBD.  I had no particular agenda, -just was curious to see what was happening in his Triumph world. 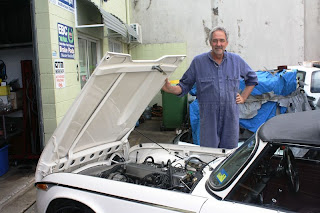 Here is Greg Tunstall.  We had a lovely discussion about various Triumphs of interest including my TR5 and Max’s TR5.  Being so rare Greg was surprised when I boasted our club has four TR5s.  Greg invited me back on the following Monday to have a ride in a client’s TR5 that he has been adjusting and fine tuning the Lucas fuel injection on. 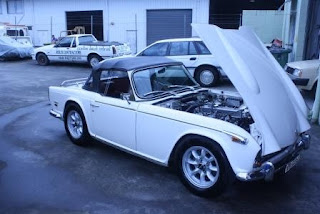 When I arrived back after the weekend I had to wait while the apprentice washed the car.  While I was waiting a mechanic in the workshop commented that it is very difficult to see where any more money could be spent to improve this particular car.  Greg put the value of the car at over $100,000 and reckoned close on that if not more had been spent on it.  He didn’t say if that amount of money was spent with him and I didn’t ask. 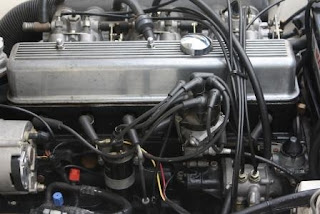 Some of the specs I remember were: Bored out to 2.7 litres, Nissan E3 pistons, secret weapon- Greg Tunstall designed cam shaft, overhead throttle linkages, rewired with modern relays and fuse panels and up rated alternator.

The Bosch fuel pump was hidden under the left rear guard which allowed for extra cooling.  An obvious additional advantage of this placement is the reduction of fuel fumes in the boot.  The fuel pump had an extras heat-sink arrangement to help keep the fuel cool. Greg had built a close ratio gear box and fitted it to the overdrive.  Datsun half shafts had been added to a limited slip diff. The suspension had been lowered by an inch and rear telescopic shockers had been fitted.  Wheels were a bit wider at 205-65-15.  Brakes were larger vented disks.
Creature comforts included a customised fully integrated air conditioner, head rests added to the original bucket seats and pump-up lumbar supports.  As a passenger I can attest that the car drove and handled quite well.  Obviously being a customer’s car it was not driven near the limit of its capabilities.  The experience and above description does demonstrate what can be done if the resources are made available to the task. 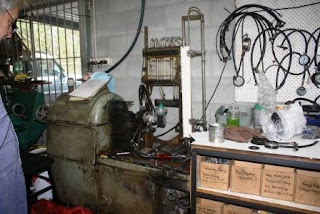 Greg did tell me that he has been researching ways of combining modern electronic engine management systems with the Lucas fuel injection.  A challenge he is looking at is how to reduce fuel supply at the lower rev range for street cars as distinct from high volume setups for racing cars. 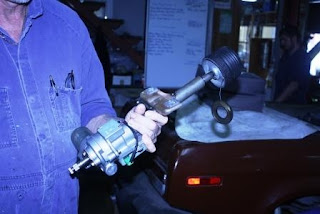 Here is a photo of an electric power steering unit for a Stag.  Greg said that it could be adapted to fit any English car and that it can be a lot cheaper option than fitting hydraulic power steering.
From Greg Tunstall’s I went to nearby from where the ferries proceed to .  A strong sea breeze was blowing and the sea was really rough.  The sea gulls didn’t seem to mind the weather they just kept flying in squabbling over my lunch (fish and chips I tossed onto the beach) and flying out.  I put a jumper on over my T shirt I think the temp was about 15 degrees by now being mid-afternoon.  I spared a thought for those folk back in .  Now I’m home.  Hay we’ve passed the winter solstice and are travelling back towards the sun.  Things should only get warmer – I hope so and soon.

Three white Stags and a nice deep blue TR4 departed the car park for a smooth trip along the Barton and Hume Highways and to the twin town of .  When I say three white Stags I should add that white ain’t white – there was a distinct variation in the shades of white on these three cars!

Anyhow, Stag occupants Brian & Jan, Dave & Tora and Rick & Diane along with John & Graeme in Graeme’s TR4 enjoyed a trouble free run to the Terracotta Café where we met up with Ian & Marion and Peter & Kay who’d driven across from Cootamundra.

Our Irish hosts served an enjoyable lunch and good coffee as we settled in for a long chat – forgetting that most of us had a long drive home.  It was great to catch up with our Coota friends.  Maintaining a connection with our Cootamundra members is important and Peter & Kay hope to visit for our Break the Ice Breakfast Run in August.

We all enjoyed a safe trip back to . 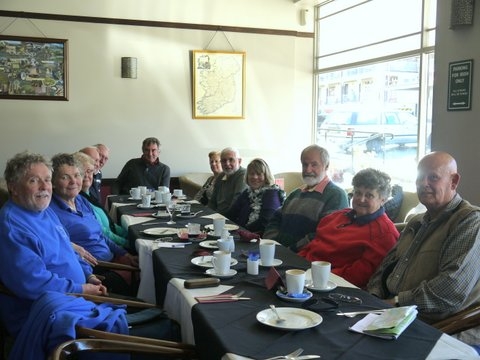 Diners at the Terracotta Café, Murrumburrah

We faced a rather chilly day in late June for an outdoor lunch at Biginelli’s Italian cafe in Kambah.  The portable gas heater took some of the chill off, but warm clothes were the order of the day.  Two Triumphs graced the car park (Graeme’s Stag and Rick’s TR5) and captured the attention of a few of the locals.

Noel & Heather, Rick & Diane, Graeme and Chris all huddled around the heater and enjoyed the freshly cooked Italian fare on offer – good tucker and coffee at very reasonable prices.  The staff certainly went out of their way to make us welcome.
Posted by Web Master at 17:39 No comments: