It’s not often that our event planning works out so well.  A beautiful Canberra winter morning of -3 greeted us as we assembled for the run to Murray’s Corner on the banks of Paddys River where we were able to actually find some ice to break – albeit on the back of Geoff Jenkins Ute, but at least it lived up to its name.  It was cold enough for Daryl Mouser to make some temporary shrouding for the TR7 in an attempt to get it warm.  Not too sure if he was successful though….


A brief detour on the way to to collect our Cootamundra contingent [Kay and Allan North and Margaret and John Hall] who were staying in Woden, meant I was only a few minutes late for the appointed assembly time.  That turned out to be only a minor delay compared to the wait at the supermarket check-out.  Apparently only one lady was available as all others had called in sick and I refuse to use self serve!  Anyway, the minor delay meant that the sun was well and truly up and we made good time to the Cotter.

John Hall’s Stag was suffering from a dose of dirty fuel and failed to make the rise out of the Cotter.  A brief stop on the side of the road to clean the fuel lines and we were soon off again trying to catch the convoy of 3 other Stags [Jack and Jenny Gault, Peter Hall with Julia and Rebecca and Allan Caldwell], Daryl’s TR7, an XK6 Jag (honorary Triumph for the day, courtesy of Kay and Allan North) and a raft of moderns [Geoff’s SS Ute, Chris Gallagher’s Focus XR5 and Dave Rogers' Passat oiler].

Our once pristine picnic ground at Murrays Corner has been washed away!  We made do by setting up in the gravel car-park and using the surviving stone wall as a seat.  Let’s hope that the Government invests some time and money into refurbishing this great little area. 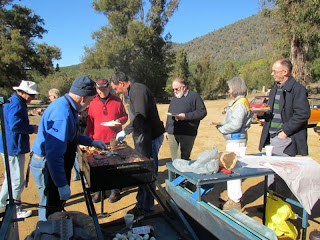 After many accolades to the cooks, second sittings for those inclined and a visit from a pair of very attractive cyclists (my wife Jan and her friend) we decided enough was enough and headed home.  It was great to see Allan Caldwell’s Stag on its maiden Club run and thanks also to the Coota contingent for taking the time to come over and join us for a chilly breakfast.  I’m looking forward to a trip to their neck of the woods in the near future.
Posted by Web Master at 18:08